‘Love and Solidarity’ will be the slogan of this year’s edition of Poznań Art Week. It refers to two notions that we find essential. The war in Ukraine has deepend our anxiety and has brutally reminded us about the degree of our involvement in geopolitical games. Only fundamental values can ease our minds and bring hope – they allow us to stay human whenever we face brutality and extreme violence. 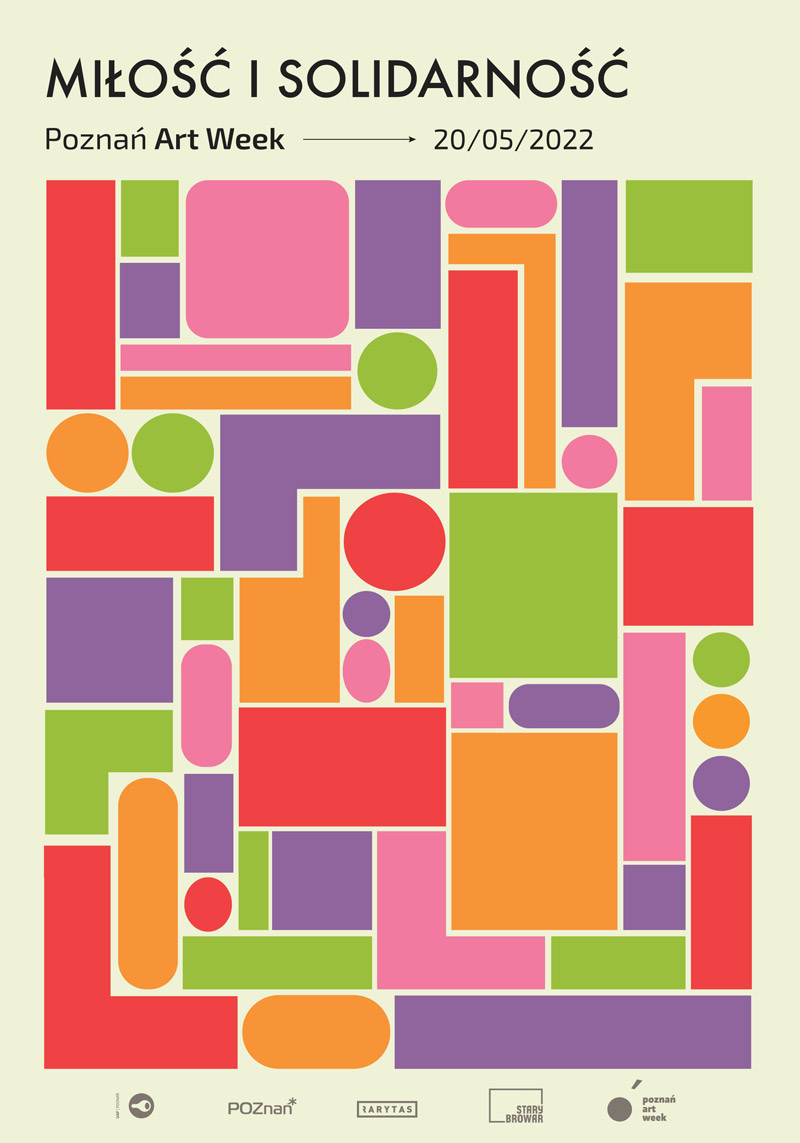 In recent weeks, Poles have welcomed Ukrainian refugees with open arms. As organizers of a major art event, we wish to send a strong signal of solidarity and to spread the humanistic approach across the media space. We want to talk about ‘solidarity’ with Ukrainians and with all people of good will from alll around the world, but we also want to talk about ‘love’.

The 2020 edition of Poznan Art Week was supposed to feature a zine fesitval exploring the theme of ‘love’ that would have brought together artists representing 4 partner cities: Tokyo (where the project originated), Hong Kong, Shenzhen and, for the first time ever, Poznań. However, due to the outbreak of COVID-19, the festival was delayed, and later cancelled. This year, amid the war and rising tensions, Poznań Art Week will return to this project and present it to the public as a symbol of strong bonds of friendship that can exist across divisions. Such initiatives are crucial since divisions between groups supporting particular visions of the world become more and more visible. We, however, believe that instead on focusing on what divides us, humans should focus on what they have in common. And this conviction makes the message of the project more powerful.

‘Love and Solidarity’ is a slogan that expresses main intentions of the festival. It is a reference to the situation unfolding in Ukraine, but is also a call to take an active stance against war and senseless violence. Poznań Art Week will again respond to the needs of the public by becoming an interactive platform for commenting current events. To achieve this goal, we will create a space for Ukrainian artists to present their works. The project entitled “Solidarity” will feature works of more than a dozen authors who came to Poland fleeing the war.

Each time a crisis occurs, society expects the artistic community to provide answers to the most burning questions . On the one hand, artists serve as a social barometer. On the other hand, artists are always ahead of events – they anticipate them in their works, and then propose constructive solutions. And this is why one of the opening events of this year’s edition of PAW will be the exhibition “Culture Against War” featuring the works of artists that refer to current events both directly, as well as on a universal level. Artists will also make references to archival works to show how our reality is conditioned by history.

Like previous editions, Poznan Art Week 2022 will involve cooperation and cultural exchange with Poznań-based partner institutions. At the same time, the festival will maintain its international character and experiment with new forms of activities. The duration of the event will be extended: it will run from mid-May until the end of June 2022. We believe that culture does not have to cater to particular interests of global politics, but it must care about
long-lasting positive feelings and emotions that are the essence of human dignity Politics tries to put people in brackets under rigid slogans, while culture is supposed to bypass the existing order of thngs and to establish its own. Culture must remind us that being human is not a politically or economically driven privilege, but is our individual commitment to respecting our ond other people’s dignity. Nothing proves our humanity more than acts of ‘love and solidarity’.

Municipal Galleries of the UAP