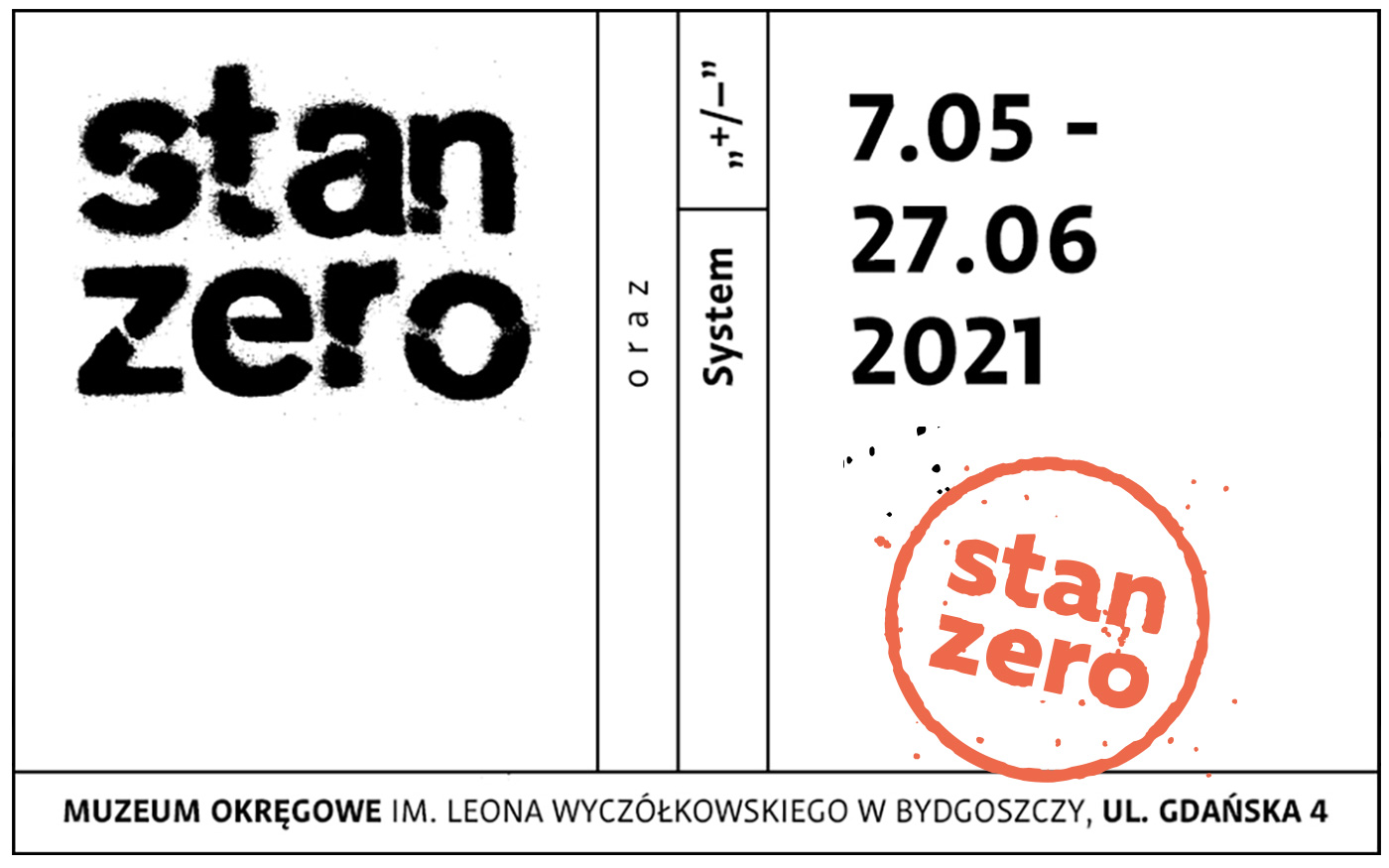 The artistic project entitled The Zero State is a continuation of the series of exhibitions entitled Bunt. New Expressions, organised since 2014 as part of the celebration of the 100th anniversary of the Faculty of Graphic Arts at the Poznań University of the Arts. It also refers to the activity of the artistic group Bunt, which was established in Poznań in 1918. The project consists of three thematic exhibitions: “+, -“, System and The Zero State. The first two took place earlier and now form a whole together with the third, new exhibition with the same title as the main project. The participants of all the events are the artists of the Department of Graphic Arts of the Magdalena Abakanowicz University of the Arts in Poznań.

The reference to the activities of the Poznań avant-garde expressionists is the basis for interdisciplinary research and discussion on the contemporary role of graphics and their function within the structures of art schools. This has influenced, among other things, a change in the definition of today’s graphic practices. The name ‘graphic techniques’ has been changed into ‘graphic arts’, which better fits the area of ​​creative exploration. Going beyond traditional aesthetics, graphic arts embrace contemporary artistic activities belonging to the aesthetics of creative processes. ‘The area of graphic arts involves all forms of printing (such as offset, photocopying and digital printing), including classic graphic techniques (such as woodcut, linocut, lithography, metal techniques and serigraphy), as well as activities performed using modern information media (such as press, books, internet, television and external screens). It includes artistic activity related to the use of graphic language – simplifications, synthesis, condensation and visual communication (accepted and commonly understood visual content) – aimed at creating new forms of creative expression. Hence, graphic arts include interventions in urban space, artnet, templates, collage techniques, archival records, graphic installations, actions on billboards, murals, comments on existing information carriers, leaflets, original posters, as well as graphic works on paper or canvas and on other surfaces’1.

Graphic works created as part of The Zero State project are displayed in a specially arranged and transformed exhibition space of the District Museum in Bydgoszcz. They relate to contemporary social issues, creating a multi-element creative statement, which is not only limited to the presentation of art objects, but also takes account of both the passive – existing – context, which is associated with the place and the current culture, and the active – created – one, which is related to description and arrangement. As the graphic works are located on the margins of the exhibition space, contextual elements are included in the area of ​​creative activity. The arrangement of the exhibition not only serves to present art objects, but also plays an important role in changing the passive perception into a dynamic form of participation. Creative activity connects subjective factors – subjectivism and individualism – resulting from artistic creation, with objectivity – social phenomena. The Zero State project attempts to break the subject-object dualism characteristic of the rationalist thought of European culture. Distancing oneself from antinomies (objective-subjective, an individual-society, freedom-necessity) allows us to move away from objectivity in art in favour of ‘creating actions and processes that give viewers the opportunity to participate’2. Taking account of the arrangement of the space, the project forces viewers to find individual elements of the exhibition and also strongly influences the message. The open structure of The Zero State project does not, however, blur the meaning of contemporary social phenomena. Some of the presented graphic works are an analysis of the existing reality, a way of ‘consciously creating the world of the work displayed – placing in its structure not strictly empirical elements provided by direct observation, but primarily the products of the abstraction process, the result of which is the recognition of the main developmental tendencies of the objective world’3. The Zero State project consists of works that often go beyond the classic structure of graphic works and the convention of using means of artistic expression in the area of graphic techniques. This makes it possible to enrich the message and make it more understandable. Ultimately, this inhibits the degradation and shallowing of the message, which usually manifests itself when we are too familiar with the current information code. The assumption of The Zero State project is to look for new solutions and not to duplicate existing patterns.4 The project extends the boundaries of creative activity to include everyday experiences. At the same time, the questions about the function of the work, not its morphology, become important, drawing our attention to experience and not to the object of art itself.

Previous
Berkay Turgut: Home around the Aegean Sea
Next
Yossi Lemel: A Journey to Pandemia