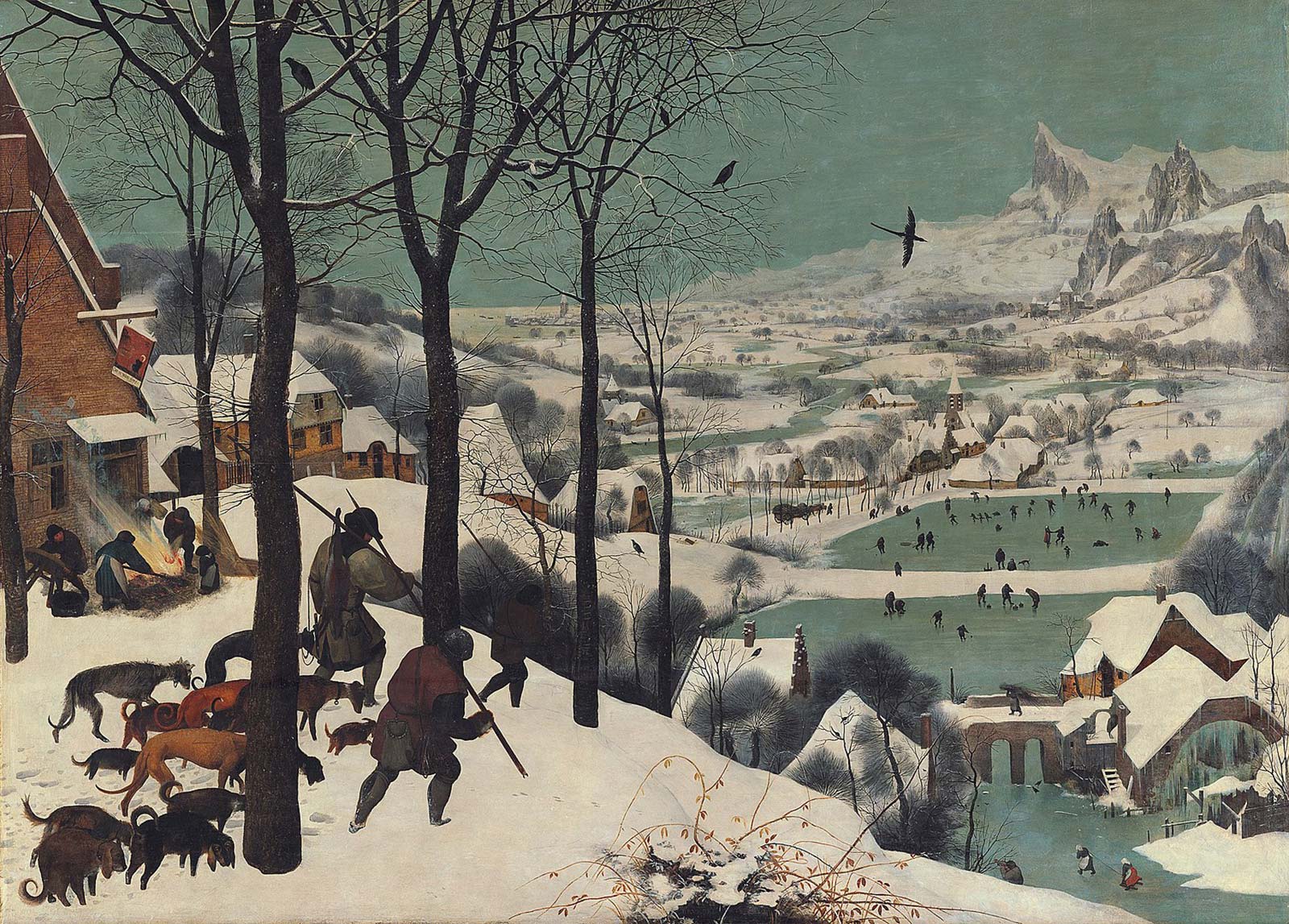 Pieter Bruegel, Hunters in the Snow, 1565

Coronavirus is here with us and doesn’t seem to be going anywhere. I shall therefore  quote a line of Wojciech Mann’s ‘un-lawless’ hip-hop, that goes,

‘’And now, covid, I’ll be honest to the core: your ugly face is something I don’t wanna see anymore”.

Mr Mann’s wish is not likely to come true in the foreseeable future. The coronavirus, aka ‘the greenish ball with tentacles’, will probably dominate the headlines for some time. What seems possible, however, is gradually reducing the impact that the pandemic brought on our world.

Recently, there has been much talk about ‘defrosting’ various sectors of economy, which refers to restoring their regular functioning. As a matter of fact, this process has already begun. In some places, only the most basic safety measures have been preserved. Many cultural institutions set to reopen, although this fact doesn’t seem to arouse much enthusiasm. The economic crisis likely to strike in 2021 has led to the announcement of funding cuts, which only deepened the pessimism prevailing for a couple of months.

On the other hands, many members of the artistic community feel as if they were living in the Matrix. Some say that drastic safety measures were not proportional to the relatively low number of confirmed cases. The media have been publishing conflicting information about the ways of infection and the actual symptoms of the disease. The fact that 80% of infections are asymptomatic only increased skepticism regarding the legitimacy of the lockdown we experienced in March and April 2020. Many commentators also question the validity of the earlier global quarantine. Others, however, point to hard data regarding the number of infections and deaths in different countries and regions. Of course, this is not the time or place to resolve these –perhaps unresolved – differences in opinions.
However, from the point of view of the debate on the situation of culture and art in time of pandemic, these circumstances are not insignificant.

Assessing the impact of a pandemic on art, culture, and the social life that puts them into context will require a thorough analysis, evaluation facts and different circumstances. There will certainly be time for this. So what can we do today? Well, we can of curse talk and make comments!

One of the memes expressing the frustration with the sector of art and culture was the last to ‘defrost’ reads, In the last stage of defrosting, they will defrost Walt Disney.

Such an incredible success of cryogenics would definitely leave the whole art world disappointed, as everyone is waiting for the expiry of copyright to Mickey Mouse and Donald Duck. The copyright for the original versions of two famous animated animals – Mickey Mouse and Donald Duck – is to expire in 2023. If their creator was resurrected, would he still be the copyright holder? This question only  appears to be trivial.

Mickey Mouse was brought into the world in 1928 when he appeared in “Steamboat Willie”, a short animated film. Under the regulations that were in force in the U.S. at that time, the character was entitled to a copyright period of 56 years.  Therefore, his copyright would expire in 1984. Disney died in 1966 leaving behind a thriving business. Lawyers of the company, aware of the possible financial losses that would result from Mickey Mouse’s transition to the public domain, began lobbying Congress for changes in copyright law. Their efforts paid off in 1976 with the adoption of the Copyright Act. It extended the period of copyright protection to 50 years after the author’s death. The problematic yet well-known truth is that legislation is not retroactive. Despite this fact, the Act included a provision expanding already-published copyright (sic!) from 56 to 75 years. This  meant that Mickey Mouse was to enter public domain in 2003. Did it  really happen? The small number of pastiches of the famous Mickey Mouse allows to guess that things took a different turn…

Five years before the expiry of the copyright for Mickey Mouse, Congress again changed the copyright protection scheme. In 1998, Congress introduced the Copyright Term Extension Act, which extended corporate copyright to 95 years from the year of their first publication of a given work. Under the new law, copyright for Mickey Mouse protection is to expire in 2023. What will the company do? Will they manage to convince Congress once again? Or will they spend millions on unfreezing its creator instead?

The unfreezing of the creator of Mickey Mouse in the cryogenic sense is not likely to happen at all.  Contrary to popular belief, Disney’s body was not frozen at all. The animator and entrepreneur was cremated and buried in Glendale, California. No one can defrost him. Today, only corporate lawyers cooperating with Members of Congress can decide about the extension of copyright protection for famous cartoon characters.

The fear of the second wave of coronavirus returning in autumn season is strong, particularly in those sectors of culture that could be paralyzed again. This fear is as strong as the fear creators feel at the prospect of not being able to freely draw from the creative potential of Mickey Mouse. We can only hope that the second wave of coronavirus is a thing as unlikely to happen as bringing Walt Disney back to life.

But what is the truth? What is fake news? In the midst of widespread disinformation, it is difficult to find a point of reference. That is why so many people feel in doubt. “We will manage somehow”, “We can do it”, “It will be ok, I guess”… – these are just a few of the slogans that are supposed to lift one’s spirits. They are also a testament to the unpredictability of the future. The introduction of interjections like “I guess…” into language seems to be a reflection of relativisation of information in everyday life.

The state of the world media and the apocalyptic feeling of alienation one could experience walking through  the empty streets at the height of the pandemic (which, according to some, has not yet arrived, and according to others, has already passed a few weeks or even months ago) brings to mind a controversial artistic project – a performance by Joseph Beuys entitled How to Explain Pictures to a Dead Hare. It took place on 26 November 1965 at the Galerie Schmela in Dresden. The artist moved through the gallery for two hours holding a carcass of a hare, making stops next to exhibits.  Beuys’s aim was to draw attention to the fact that explaining a work of art to the audience is as important as presenting the work itself. For Beuys, explanation was a ritual. The performance illustrated the artist’s conviction that the audience is not good at listening: “even a dead hare can experience intuitive contact with art more than a living audience”.

There was much provocation in Beuys’s performance. As another hour passed, the audience was admitted to the gallery. Unlike the rabbit , they showed great interest in what was going on inside. At one point, the artist sat down in the middle of the room holding the hare, surrounded with a crowd of viewers, with the rabbit in his hand, and went on with his argumentation. The performance is considered to be one of the first conscious “performance lectures”1. Beuys’s performance simultaneously focused on many different meanings and social points of reference. On the one hand, it expressed faith in the power of words and the need for naming and translating the reality that surrounds us. On the other hand, it was a kind of perverse game with the historical determinism, in which a certain version of events is easier to push forward as the listeners cannot argue because they are dead. Contrary to his own declarations, the artist did not mean to reach the rabbit but the audience.  He tried to do it by creating an absurd situation in which death – symbolized by a dead animal – became a pretext, a kind of focus of attention, while the proper meaning of the action was, however, located elsewhere.

As Piotr Morawski aptly put it:

“as you […] watch a fragment  of the video from the Galerie Schmela, something else strikes you – you don’t need to get into symbols anymore. Viewers crowded in front of the windows see Beuys  walking around empty rooms with a dead hare in his hands and tells it about his works. However, the audience standing outside cannot hear what he is saying.  Without any doubt you can clearly see that Beuys’s performance is aimed at criticizing the institution of culture. It is alienated and it separates itself from the society. It has lost its public and, which Beuys cared about the most, pedagogical function. According to Beuys, who back then was as professor at Kunstakademe in Düsseldorf,  the main purpose of art was to teach.  The rest was only secondary. To  teach in an effective way, people had to be presented with something tangible, something they could touch.  That is why words were not enough, and an academic lecture was as futile as to talking to a dead hare”2.

This brings us to the current crisis of narration. Previous creative strategies seem  inadequate in the situation we are facing today. From today’s perspective, the pre-covid oppositions and relations seem to be ‘out of date’. The pandemic, just like a ‘dead has’, has not yet contributed to a broader debate on the possible change in the cultural sector. Despite multiple debates, there is a prevailing sense of expectation.

Despite the ironic smile that Joseph Beuys’s performance can evokes in people not related to the word of art, it is hard not to get the impression that his conclusions are only seemingly funny. Most of the conspiracy theories are, in fact, terrifying. They are probably results of concerns about the future and the shape of the world we know today.

Instead of a conclusion

The future is unknown and this is what makes it so fascinating – one ancient philosopher was supposed to say. The desire to discover one’s future, destiny, and fate has been a well-known cultural motif…

Perhaps the logic behind history is that it follows a sinusoidal pattern of sequential periods of enslavement and liberation. In this model – just like in Karl Popper’s falsifiability – thesis and antithesis create a synthesis, which is in fact another thesis… Today we accept restrictions in the name of security, and in a moment we will fight to bring back our previous scope of  liberty. Will we succeed? According to one of the concepts, the chart of the history of individual liberty is a line constantly moving upwards, but marked by numerous periods of regress. The long-term perspective of human history, however, clearly show that the scope of individual liberty is constantly expanding.

Changes are inevitable. Some say that the quarantine has accelerated digital revolution. As we analyze the causes, the course, and the effects of the epidemic on social life in general and on cultural life in particular, we need to remember about  the most important thing –  despite everything, we continue to exchange thoughts and to make comments. As Piotr Piotrowski, an extremely inspiring member of the artistic community that we miss dearly until this day, ‘dispute is the mark of humanity’. These words are worth remembering in their full ambiguity.

Lawyer, art historian, exhibition curator, art critic, author of publications, court expert in the field of copyright and visual arts. Author of monographic studies on the legal frame of artistic production. Curator of art exhibitions and editor of exhibition catalogs in Poland and abroad. He published in many artistic magazines, including Arteon, Art & Business, Format, Kwartalnik Fotografia, Obieg.pl, in total, over 100 articles and interviews.