Penumbra in the Glow of the Screen 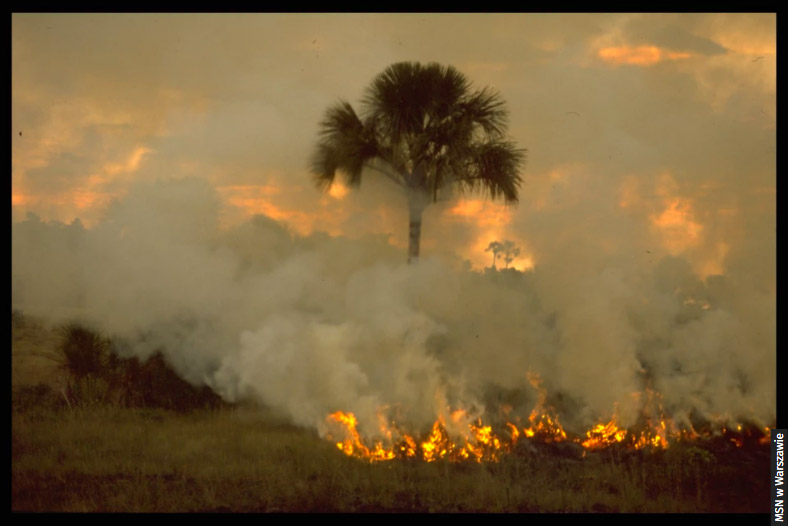 “Age of partial shade. Art in times of planetary change” at the Museum of Modern Art in Warsaw. In the picture: Frans Krajcberg, “Deforestation” (Brazil)

The review of the exhibition The Penumbral Age. Art in the Time of Planetary Change

I first heard of the exhibition The Penumbral Age. Art in the Time of Planetary Change held in the Art Museum in Warsaw during a meeting with Sebastian Cichocki organized in the Tak Gallery in Poznań (A Rehearsal Before the End, December 2019). The curator shared with the participants the mind map, texts and inspirations1 which played a crucial role when working on the exhibition co-curated by Jagna Lewandowska. From that first moment the whole project seemed interesting to me. The presented works didn’t often concern ecology directly. They weren’t always material products. My expectations were very high, particularly due to the fact that the topic of crisis is currently in fashion. I knew that the exhibition itself, as well as the accompanying events,   will be equally important for me in this project. I wondered whether producing another eco exhibition is not a mistake, satisfying the whims of educated middle class. Isn’t it by any chance a sort of greenwashing2?

Unfortunately due to the spreading of the virus COVID-19 the opening date of the exhibition planned for the 20th of March 2020 couldn’t take place in the usual, vernissage way. The curators posted a text on the exhibition’s fanpage instead – an announcement of the altered form of displaying the assembled intellectual capital of the exhibition. An interactive website was premiered. In the post Lewandowska and Cichocki pointed out the “irony of the situation: the consequences of violence against nature, one of the topics of the exhibition, triggered an institutional paralysis. Climate changes influence every area of life, even art – its production systems, distribution, social function and relationship with other disciplines, notably science”3. The online opening was accompanied by the concert of DJ Collective Synergia which invoked memories associated with the post-vernissage functioning before the pandemic.

Can you write a review of an exhibition which you haven’t seen? An exhibition that nobody has seen and it may occur that nobody will? The form of contact with recipients announced at the opening gave such hope. After all the whole team working on this project4, very large-scale one for Poland, created an immense intellectual capital. Due to special prevailing conditions the exhibition has been transformed though, somewhat recycled. It was newly designed and arranged.

A huge challenge has emerged before the team co-creating the exhibition. You need more than a month to plan the content and the accompanying events. Designing the realization of concepts in every detail and coordinating the work is a long process. After the decision to change the way of presenting the project not in a gallery but on the internet, the curators decided to establish a website (its project was made by Huncwot5 ). In my opinion it’s a kind of a model thanks to which we can observe the exhibition. I intentionally write about observing, as The Penumbral Age goes beyond the bounds of the gallery. Although we don’t watch the exhibition in the Pavilion of the Museum on the Vistula, we have an opportunity to fully confront its concept.

The website was designed in an accessible manner. It’s a one-scroll page (the text is put on one “page” that can be scrolled). The content was divided into seven chapters: The Exhibition, New ways to see the world, Global art for a changing planet, Solidarity and Care in the Museum, The Cinema, Guide Book, Artists participating in the exhibition. You can discover the text in sequence or at random (thanks to the menu with contents in the top right-hand corner of the website). Each chapter is designed in such a way that as a whole it seems like a visual essay devoted to The Penumbral Age. The curators definitely focused on its visually attractive form, communicativeness and comprehensibility. The first, second and third chapter refers to the exhibition itself. In chapter four (Solidarity and Care in the Museum) the curators decided to share with the recipients the lexicon of scientific words regarding the climate changes chosen to build the narrative. Thanks to that fact it’s much easier to figure out the context of the used words and how they are understood by the creators of the concept. In chapter five there is a notice of publishing the film materials that were scheduled to appear on the exhibition online. The sixth chapter is an invitation to acquaint oneself with the accompanying publications, more specifically with the Guide Book to the physical version of the exhibition (composed of the curatorial text, catalog and description of all the works as well as profiles of the artists) designed by Jakub de Barbaro and Hello, Earth Here! – an interactive version of the guide with exercises for children (text by Katarzyna Witt)6.

Second and equally important platform which is the basis for promoting and expanding the narration concerning the exhibition is the Facebook fan page7 (created regardless of the Museum website). There are several kinds of activities on the platform. Most frequently “classic” posts appear with short descriptions of particular works or a biographical profile of an artist/a collective. Sometimes posts include a link to a screening of a work showed at the exhibition (available online for a short period of time), like a video or a reference to a portfolio. The curators also try to keep the audience of The Penumbral Age updated on events/actions/ecological strikes in Poland and abroad.

However in my opinion the most interesting format is the series that I would call here a postcard. The cycle is based on short video-postcards sent by people who take part in the exhibition, which are then published on the fan page. So far we could watch the films sent by Antje Majewski, Rony Kropeczky, Krzysztof Maniak, Tatiana Czekalska and Leszek Golec, Joanna Rajkowska, Agnieszka Brzeżańska and Anna Siekierska8. The curators made an effort to not only stay in touch with the recipients, but also with artists who take part in the exhibition. In my impression this interaction narrowed the distance between the artists and the audience.

In the age of the pandemic more and more institutions choose online curatorial guided tours of the exhibitions opened during the pandemic or just before the galleries were closed. The curatorial team of The Penumbral Age offered everyone concerned participation in the project in the form of an online seminar Forum of the Penumbra. Philosophy Seminar9, led by philosophers Adrian Krupa and Bernard Wnuk. In the description of the seminar the leaders point out that this form is available free of charge for everybody who is interested. The meetings are held on Zoom. Besides the mentioned seminar, the Museum of Modern Art offered a series of lectures entitled Coronaseminar. Reflecting in time of pandemic led by PhD Ewa Alicja Majewska. The format is similar and perfectly completes the exhibition activities of the institution.

What defines The Penumbral Age is its educational potential. The exhibition has become an extensive project involving a wide range of events, visual art being merely one of the components. By setting up different kinds of online platforms (you don’t have to be a Facebook user to fully familiarize yourself with the idea of the project) the curators managed to stay in touch with the museum audience, stimulate discussion and work in the process. Educational offers enable to obtain full information on the ideas and to creatively raise the awareness through an active participation in the debate. At the same time The Penumbral Age as a whole (exhibition, platforms, seminars) comprises of clear proposals accessible to a wide audience. This is due to several factors, including creating two language versions of the website (in Polish and in English).

It may appear that the translation of texts is already a kind of standard, however during the virtual pandemic events it doesn’t always happen. The possibility of seeing the exhibition from home is also comfortable. Thanks to that fact we have more time to take notes or save the links. Online exhibitions give a chance to gain a wider perspective, to repeatedly recur to images and texts. Therefore the contents are not, paradoxically considering their physical and screen origin,  reflections in memory.

On the website of The Penumbral Age days are being counted down till the closing of the exhibition. The countdown can also be seen as the time of the exhibition’s operating on new, changed terms. I’ve been wondering whether due to modified functioning principles (which also influence organizing physical exhibitions) shouldn’t we reformulate the way of presenting the final versions of projects, researches or artistic residencies. The Penumbral Age is an example of a project which evolved towards its development. The curators transformed the concept, the target form of which was the exhibition of modern art, into an educational platform in which art works as a tool that helps us become acquainted with the topic. The transition of the exhibition didn’t change it into a sketchy documentation launched online. When I came across the curators’ idea for another eco exhibition for the first time I was, as I mentioned in the introduction, sceptical. I keep pondering if, and in what way should we generate actions (that also produce waste). There is a very thin line between this approach and hypocrisy.

In my opinion, in the pandemic framework the project of Cichocki and Lewandowska definitely turned up very well online, though it was prepared for a gallery. I’m even inclined to say that considering the extensive, open educational character the curators set a new level of presenting online activities.

Despite the fact that The Penumbral Age positions itself well on the internet, I still hope we will soon start counting down the days until the opening happens again, this time in a non-virtual form. Not only because operating online doesn’t fully meet intellectual and substantial needs. What draws us to a gallery is not the sole concept of the exhibition, but the direct contact with art and other human being. Joint experience of the exhibition while having each other at our fingertips is something that we are all greatly missing right now.

Curator, coordinator of art project. Bachelor in Curatory and Art Theory on Poznań Art University since 2019 where she continues her Master Studies. Curator of the following exhibitions: Exhibition for Home (Zamek, Poznań), We wished for a comfortable life (SKALA, Poznań), 8x (Pireus, Poznań), Diffusion (Archaios, Poznań), RGB, Maggie/Gosia (during AK 30, Poznań) and We know, and even like each other (as curator, BWA Zielona Góra). She cooperates with public institutions and NGO circles. In 2019, in Zamek Culture Center, she organised a charity auction for children with autism. She was also a coordinator of children’s programme on Malta Festival in 2017.

Previous
How Is Art Holding Up?
Next
Post-competition poster exhibition “Remedy”